It has been a long process, with ups and downs, and in the end a race against the clock to finish in time. The brainchild of Nomads Cricket Club, Zurich Crickets Cricket Club then joined hands with Nomads CC in 2020. Together, plans were developed and pushed to get this project underway, over the finishing line and ready for the 2021 season.

This has been a project financed jointly by Nomads CC & Zurich Crickets CC. Nomads CC, founded in 1985 in Zurich and one of the oldest cricket clubs in Switzerland, boasts over 40 club members, and is an associate member of Cricket Switzerland, which is a member of Swiss Olympic. The club not only promotes sporting excellence, as past and current records proudly and rightly demonstrate, but sees itself as easing the process of integration of non-Swiss residents into Switzerland. Upholding and boosting the concept of fair play in sport Nomads CC combined forces with Zurich Crickets CC in a joint venture to promote the growth of cricket both in the region and nationally.
Zurich Crickets Cricket Club is the largest cricket club in Switzerland. It was founded in 2004 and today has over 80 playing members, mostly aged 7-20 years, 13 qualified coaches and a number of parents helping behind the scenes. The club is also an associate member of Cricket Switzerland. The club is run by parents of the players on a voluntary basis, who put in countless hours of work every week of the year. Cricket for ZCCC has always been just as much an indoor sport in the winter months as an outdoor one as soon as the snow and ice has melted away. The club organises matches against teams from all over Switzerland at both junior (under 11, under 13, under 15, under 17/19) and senior levels. Currently, the club has two youth teams that play in the men’s leagues in Switzerland. Players also have the opportunity to play for the national junior XIs, which usually tour other countries in the summer.

Prior to 2021, for two years at Hard in Embrach a temporary wicket installation was used. This involved the laying of large and heavy boards, taping them all together and placing a ‘pitch’ mat over this construction in the central playing area. This was demanding and time-consuming work requiring at least eight adults and an hour and a half of their time to set up the structure. Tongue in cheek spectators claimed such a process meant the usual warm-up could be omitted. And the 90 minutes required to store everything away after the match? – certainly, not a cool-down.
Obviously, for junior or women’s cricket this was not a viable option and severely restricted them being able to play at the ground despite its spectacular outfield and pleasant surroundings. In addition, not having a level and firm ground in the central playing area can lead to injuries. To help further the game of cricket in Switzerland good playing facilities are essential. Embrach is an ideal location, and a baseball club has been enjoying the large playing field for a number of years. Combining the two sports to develop an even better ground is nothing new. Such playing facilities already exist in several European countries.
In January 2021 a proposal was submitted to the Zurich building authorities. This lengthy document took weeks of research and fact-finding to draw up. Its detailed nature meant that just four weeks later efforts were rewarded, and permission to build was granted. The pitch was immediately ordered from England in February and work begun on the construction of the 40-meter concrete base. This is a complicated process and first of all meant finding the flattest, most suitable area. Once the hole had been dug, taking care not to damage the outfield with heavy machinery, a bedrock foundation was laid for the concrete slab that was poured in 3 pieces with silicon dividing lines to avoid cracking resulting from extreme changes in temperature during a Swiss year. On top of the concrete a shock-absorber layer is first placed on the concrete, followed by the latest Notts artificial cricket mat. By the end of March the work was complete. However, the grass area surrounding the new wicket required further work, which delayed being able to use the ground in April.

Looking forward, and back again

Work has been completed and the pitch is now ready for training games that observe the present rules and regulations laid down by the government due to the Covid pandemic. Perhaps things will return to normal in 2021 and the cricket leagues will be played in full. There is no doubt, though, that a ground of this size and quality will greatly benefit cricket in this area, and also nationally. International matches and tournaments can take place at both junior and senior levels. Artificial wickets are far from plentiful in this country. After Bout du Monde, Cossonay, Winterthur, Basel & Cern, Embrach is just the sixth such ground.

Finally, a reminder of what such a project demands. It has been a small group of dedicated persons who have made this project a success. Hours of consultations, the putting together of an in-depth presentation, the many phone calls and letters to authorities, the negotiations with various involved parties, the working to a tighter-than-tight schedule once permission was granted, the finding of suitable partners to carry out the work, the generosity, precision and know-how of the Kibag building company (one of the bowling ends has been named the Kibag End), and finally, the many, almost daily trips to the ground for weeks to oversee the work and also to liberally water the new grass every day throughout April to ensure best results. Wives and families have been more than understanding! Hopefully, almost all cricketers in Switzerland will come to know, appreciate and enjoy Embrach. 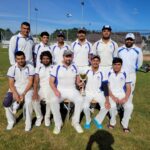 Batters shine for National Team in a run-filled Practice Match

Sizzling Hot Start to the U15 Catterfly Cup